After essentially doubling the size of my mainland parcel and working on it over the past few weeks, it’s now (mostly) finished! The shop itself has remained the same, but I’ve spent a lot of time creating the park. I was going for a mix of nature, fantasy, relaxation, and fun. My favorite area is the butterfly cave, which I found at Love — it was something I hadn’t seen in SL before!

Another favorite is the zip line system, which is from exploring the shopping area at SL15B. At first I passed on it, but then realized it would be the perfect way to travel between the treehouse, sky islands, and pond above the butterfly cave. An unexpected bonus of being a premium member is I’m able to get in to the shopping sims at SL15B with no problem. I thought it was that way for everyone, but last weekend I tried to show my non-premium partner what was there, and he was plagued with “this location is full” messages. I’m hoping it will be more accessible closer to the end tomorrow though.

I also added a balloon bridge, treehouse with board games (that you can actually play), marshmallow roasting, sky islands with yoga poses, unicorn hideaway, and finally retextured the ground with LandMap. While the ground looks a million times better, the annoying square of land issue is still there. Just have to build around it and deal with it.

I discovered some new content creators during this process as well — Love, HPMD, Cube Republic, 3D Trees, We’re Closed, Lore, Goose, What Next — to add to my staples of Trompe Loeil and Studio Skye. Plus, I learned how to duplicate existing rezzed items (instead of rezzing a new copy), and that has been the best thing ever! 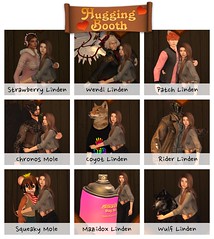