Yesterday, I finished Blaze, a new fiery pattern that includes leg, hoof, and unicorn tail textures! It came about after I discovered how to make realistic fire while working on another coat — and can’t say no to that 🙂

Then today, I finished Kaleidoscope, which is my first coat with a colored/iridescent specular layer (instead of a monochrome one). I was inspired after noticing the same effect on a mesh unicorn figurine — it had a regular base design, and then a completely different design that only appeared where the light hit it. I wondered if I could do a similar thing with Water Horse, so started messing around with layer effects. It took me a while to get the right intensity, plus design the base coat in a way that still looked good on its own (for those using lower graphics settings). I definitely like the end result!

I'm Claire, and Lunistice is my little shop for horse & avatar textures!

I've been in Second Life since 2011, and decided to combine my love of art & animals into something creative in April 2018. As you can see here, my style leans more toward the fantasy realm :) 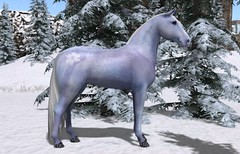 Bringing the beauty of our natural world into Second Life.

The Girl With A Horse

The thoughts of a Girl, with a Horse, on Second Life.

....about Fantasy Fashion, accessories, and all things Fantastic in Second Life!

My SL fashion and travel blog

A Second Life Blog ❤ by AmandaMagick ❤ Don't Hide Your Magick!